Why the Internet of Things (IoT) security is essential, and what is OWASP’s Top 10? 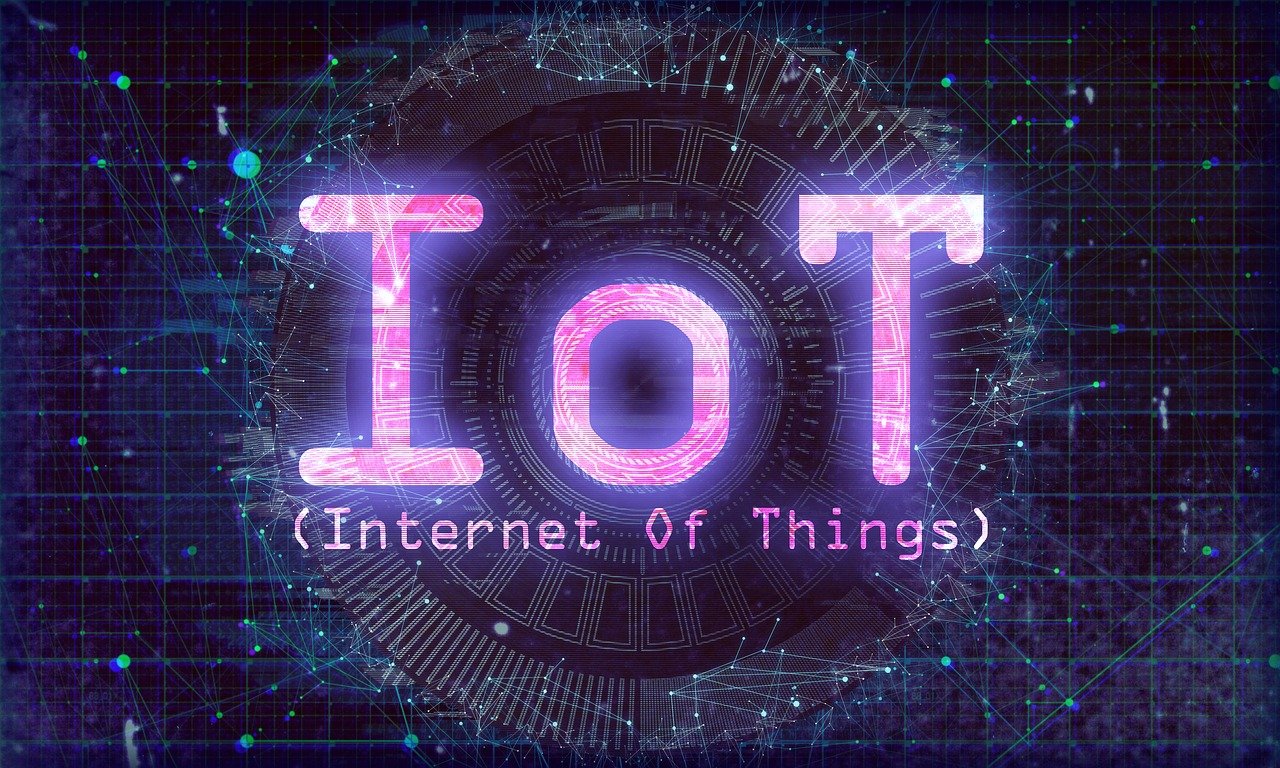 IoT technologies have been with us for quite a long time, and with the passage of time and fast development of Wireless Internet and 5G, it is becoming fundamental for homes, industries, and hospitals, etc.

The IoT technologies are developing, cyber espionage and attacks are also evolving and becoming more sophisticated day by day. Numerous weaknesses can be a cause of vulnerable IoT devices/solutions. Previously IoT devices were not built on the security model, and no security controls were combined into them. Consequently, lots of viruses and malware were delivered through them.

The forecast suggests that IoT devices will grow by $1.6 trillion by 2025. At this moment, IoT devices have been consolidated into our lifestyle; from smart cars to smart wearable medical devices, our lives and worlds are becoming more interconnected with each passing day. Whereas, the rising ratio of the attacks and complex crafted threats has made it an important reason to integrate security and privacy into digital products, devices, and everything that utilizes the internet.

IoT device security can only be achieved if better security decisions are performed while creating, deploying, or evaluating IoT technologies. To make your IoT solutions resilient and tedious, it is necessary to assess your device with relevant security analysis. There are various security measures, standards, and best practices such as GSMA IoT Security Guidelines, IoT Security Foundation Publications, Onem2m security standards, etc., that are specifically designed for IoT security.

OWASP Top 10 is specially designed to help manufacturers, developers, vendors, and consumers to understand security risks in IoT devices. It helps to mitigate the risk in all of the integrated IoT devices and protect the entire network infrastructure connected to them. 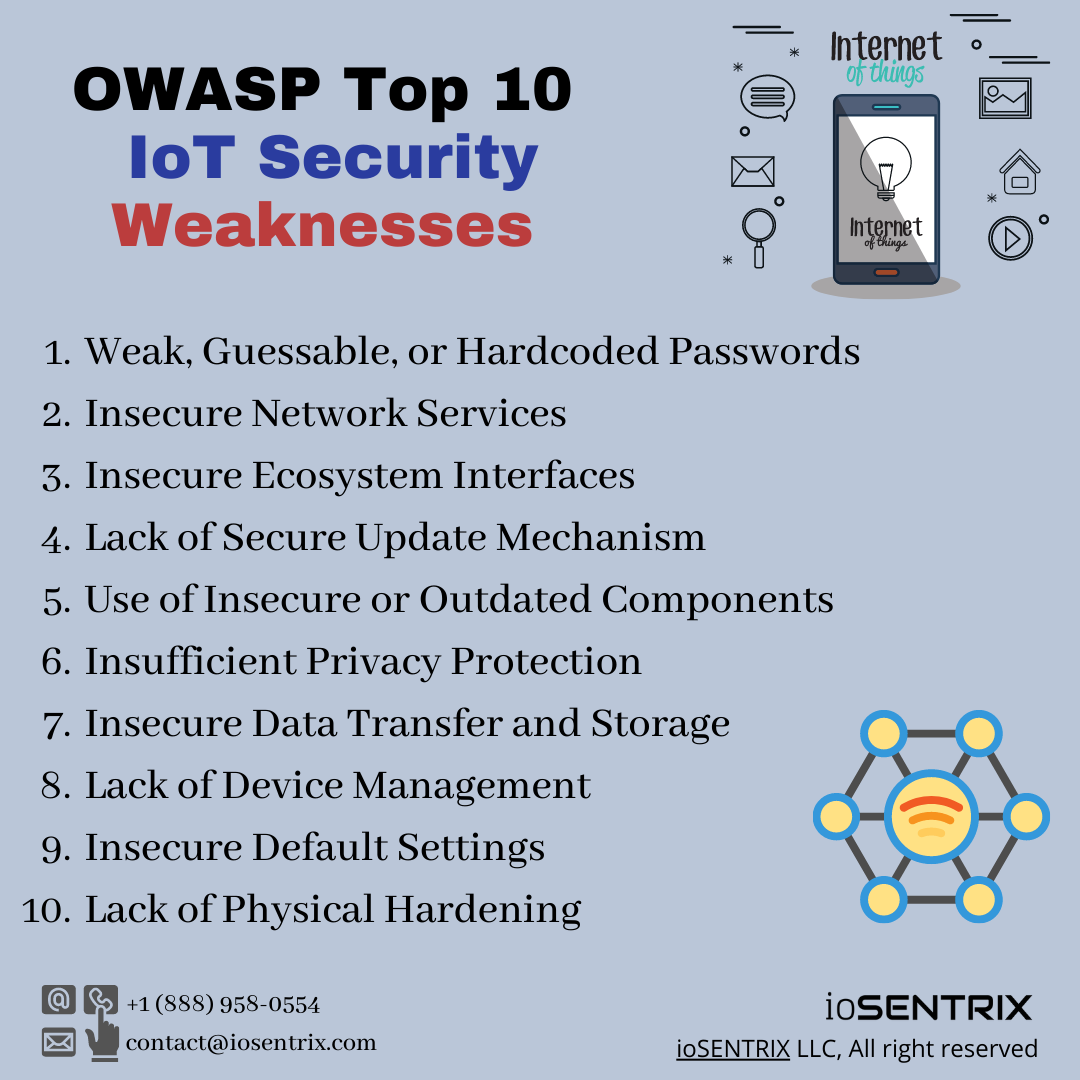 Use this link to download this OWASP Top 10 IoT Security Wearnkesses infographic in PDF format.

Remember, OWASP Top 10s are just a starting point to implement security controls, and testing them doesn’t guarantee that your device or solution will be 100% secure or it could not be on the edge of any risk. To have better security, you must test your device beyond these ten checklists.

Passwords play an imperative role in refraining from unauthorized access and backdoor installation. Instead of using a simple or guessable password that can be broken down quickly, use complex passwords to protect your deployed system against brute-force attacks.

Similarly, hardcoded passwords can compromise all similar devices and applications and even jeopardize the critical infrastructure. Often companies use the common hardcode passwords and credentials to simplify the deployment or manufacturing process at a large scale, and the same credentials are embedded into the codes.

This practice of hardcoding passwords into the source code puts the device at high impact risk because once the attacker knows the password, they can abuse the functionality to create an outage.

IoT devices utilize network protocols and ports to transmit and receive data. This transmission demands the proper security of the interconnected network with appropriate administration and an in-depth protective strategy. Each of the services running over the web and above layers is responsible for data protection and integrity while communicating over the public or private internet. The transmission running over the insecure network services can present the overall infrastructure to multiple risks and provide a clear path for vulnerabilities exploitation. Accordingly, if the network services are adapted insecurely, it can provide an open approach to malware, DDoS, MITM attacks, etc.

To prevent such compromised incident always:

IoT devices run through the combinations of different interfaces and components and create a device ecosystem. Every connected device and elements in IoT share data and functionality to perform a particular task.

The sheer number of connected interfaces and systems design can map out many attack surfaces to exploit if it is not deployed or configured securely. Therefore, it is essential to secure the ecosystem of the devices and their related components by guarding every aspect such as web, cloud, backend APIs, mobile, local, or remote interfaces with proper input and output filtration. This way, the communication between devices would not be hackable or interceptable.

Due to the expanding landscape of cyber-threats, vulnerabilities are discovered once the software and devices are deployed. Often the bugs that had no impact in the past evolve as critical impact bugs. To catch-up with such vulnerabilities and bugs in hand-in-hand, it is necessary to patch them.

Over-the-air (OTA) updates are the most beneficial in the case of IoT devices. OTA provides the remote opportunity to patch security bugs instead of in-person device updates. But, if the IoT device lacks the secure update formula, it can impose the highest threat than the vulnerability itself. It is necessary to make the OTA safe; downloading the OTA update is a set of risks; the way it is beneficial can be equally disastrous. In many cases, insecure update mechanisms, including weak validation, uncertain delivery, or unverified notification, can put your IoT solution at a high impact risk.

Some of the common problems are lack of TLS/SSL communication to deliver the software updates. Similarly, unsigned updates allow the attacker to forge a malicious update that helps in rooting/jailbreaking the device or execute malicious code.

To not let your device become a victim of such things, properly implement features that support strong validation in IoT devices, anti-rollback mechanism, signed and secure update delivery.

5- Use of Insecure or Out-dated Components

Ultimately, software and components grow outdated. Often vendors stop the manufacturing and software up-gradation. In that case, no patches will come in the future, and if the security weakness is identified in such products, components, or software version, it places the whole IoT solution in an extensive and compromising environment.

The usage of deprecated or insecure software or components can allow the attacker to compromise as well. It is most possible in the case if you’re using third-party software/libraries or features from a compromised supply chain.

Poorly stored sensitive information or (PII) in the device or any ecosystem can cause enough havoc. While incorporating privacy protection in IoT devices, it is essential to keep in mind that your users’ privacy remains intact from passive network observer to active device user in every possible case.

IoT solutions must ensure privacy even when the IoT device becomes obsolete or discarded because if the abandoned or obsolete device gets under the control of a malicious actor, he/she can usurp the device functionality and take the user’s digital data.

Data are the assets; poorly managed storage or lack of encryption can expose the device data and sensitive information. IoT devices and applications might have access to user-sensitive data, and this makes it mandatory to ensure the security of data and information storage in the device and the data being transferred inside and outside the device ecosystem.

Insecure data storage can lead the device to material loss, reputational damage, identity theft, policy violation, and much more. In the absence of encryption and secure protocol, the network communication is vulnerable to MITM attack and uncontrolled access to the device. Similarly, If the data is being stored into the IoT devices without secure protocols and encryption, it increases the potential of being compromised via physical access.

IoT devices collect a ton of data and communicate to the connected end-points and components without the need for human interaction. They are tied for sharing back and forth to the interconnected sensors, components, and the ecosystem on a unified platform; this increases the demand for high-level secure device management into the Internet of Things.

Regardless of the structure and size of the consecutive devices and IoT solutions, the absence of device management provides an open ground to the attackers. In light of this, methodological device management is necessary for security support on the devices, including asset management, system monitoring, update management, response capabilities, and secure decommissioning.

Integrating security features into the device while shipping can prevent unapproved access and reduce the opportunities of the device being misused and misconfigured. Often, in negligence, device default insecure settings remain turned on while shipping, resulting in exposing services being run and root permissions, etc. At other times, the device lacks the default setting restriction, leading to the modification of services, resulting in the consent given for many malicious purposes.

To avoid unauthenticated or unauthorized access, nowadays, devices come with OOBE that must be implemented by default for the user’s initial configuration of hardware and software to ensure the overall Confidentiality, Integrity, and Availability (CIA) in every security direction and unapproved accesses.

Physical access can be disastrous to devices that are not hardened against physical attacks. It can impose the risk of interchangeable configuration that can be used to extract information. It is crucial to align the physical hardening with every possible aspect of security limitation.

Even a removable MicroSD card can help an attacker extract sensitive information and gain embedded passwords or help insert a malicious backdoor into your IoT solution. To stay defended from such activity, it is necessary to harden your IoT device with the System-On-Chip (SOC) as a proactive approach against physical access.

IoT is playing a significant role in all of the businesses and continues to evolve. Being considered as the Internet revolution, it demands focused security assessments with industry best practices and policies. The IoT security must be prioritized while designing and building the IoT, not as an afterthought once the device is compromised or exposed to risk. Many IoT devices are still being deployed with the most basic hacks amidst more cyber attack incidents being reported.

The intrusion coming to IoT solutions from all surfaces needs to be blocked from every aspect, which cannot be done without a professional assessment. IoT basic security testing can be achieved with the guidelines mentioned above, but relying on them will not guarantee whether the high-low priority vulnerabilities have been identified and remediate from getting misused.

ioSENTRIX’s highly-skilled security professionals have diversified and a wealth of experience in evaluating IoT, IIoT, and embedded devices. We deliver security with the greater visibility of vulnerabilities and threats residing in your infrastructure, devices, network, and system. Whether you want to testify your IoT solution or boost your IoT security, contact us today.

« Compromise Assessment or Penetration Testing - What to choose and Why? How to achieve application security with a secure software development lifecycle (SDLC)? »